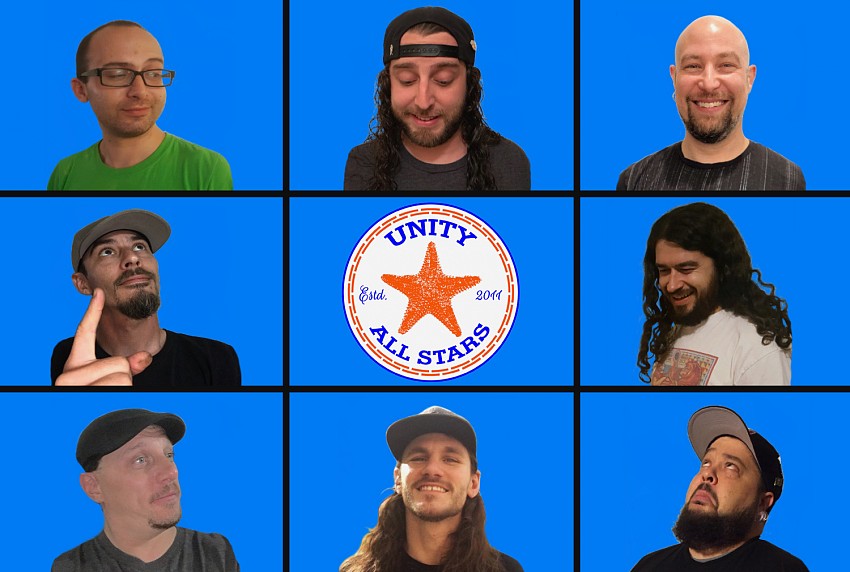 The Unity All Stars

The Unity All Stars are a cover band made of hardcore 311 fans from all across the country, blending a mix of rock and reggae with high energy and musicality. Each member has a musical story all their own, but they are all united in a love for the music of 311. Having grown over the years, and having different musicians collaborate while playing pre-parties for large 311 events, they have developed and created a sound that resonates with 311 fans and music lovers alike. The current lineup includes Kevin LaBella on vocals, trumpet, and rhythm guitar, Dan Voehse on drums, Brian Sweeney on lead guitar, Aaron Zuckerman on bass guitar, Shawn Van Houten on vocals and guitar, Chris Childress on rhythm guitar, Mike Sterling on trombone, and Daryell “Scoob” Royer on the EWI. Kevin, Brian, and Aaron first met in college at the University of Albany, became fast friends, and formed a cover band named Infectious by Nature. Influenced heavily by bands like Sublime, 311 and the Red Hot Chili Peppers, Kevin, Brian and Aaron rocked venues and house parties alike for years, but would move on to live in different states. These three friends developed a knack for coming together and playing great shows while not having a central location, something that all future Unity All Stars members would bring to the table.

Dan Voehse met most of the Unity All Stars current members on the first 311 Cruise in 2011, and the idea of forming a new band began. In the summer of 2011, 311 came to Red Rocks in Colorado and a group of 311 fans set up a pre-party at a Denver go-to spot, The Cheba Hut, where musicians within the 311 fan base, including Kevin, Brian, Aaron and Dan, performed for their fellow fans. The small and mostly acoustic show would serve as the springboard for the formation of The Unity All Stars as they are today.

Shortly after the 2nd 311 Cruise in 2012, Kevin LaBella found himself moving from New York to Texas and after a few weeks in Texas, Kevin was living at Dan’s house. In their free time, Dan and Kevin would jam and play cover songs. In the summer of 2012, 311 once again had a tour stop at Red Rocks, and the pre-party was set at The Cheba Hut. This time, they brought a full band to rock the Cheba Hut, including Brian Sweeney and some members of Oklahoma’s Tastebudz. The show was a huge success and led to The Unity All Stars setting up and playing their own pre-party at the House of Blues in New Orleans for 311 Day 2014. Continuing to build on the success of the pre-party shows, The Unity All Stars were offered a dream gig when they were asked to perform on the 311 Cruise 2015 to Jamaica. This performance added Aaron Zuckerman and Shawn Van Houten to the band. The two cruise performances as well as the Miami pre-party were a huge success, and in no small part to the single, The 311 Cruise Anthem, co-written and produced by Brian Bizzy-B Hughes.

After the 2015 Cruise, Mike Sterling and Danny Lynch joined to create a full horn section, and the band was once again asked to perform at the official after-parties for 311’s Red White and Boom 4th of July weekend shows in Las Vegas. Chris Childress was then asked to fill in for Brian, who was honeymooning in Ireland, for the Vegas shows and was so impressive he was added to the group full time. UAS would then be brought back to perform on the 2017 311 Cruise. Scoob was then added to the mix to fill out the band’s sound following the cruise. The following year the band was tasked with starting the 2018 311 Day weekend festivities off at the fan party in Las Vegas which they did in a crowded sweaty bar on the strip. The Unity All Stars are a band made of, and for, the people, and their live shows are a testament to this. While working on independent projects and continuing their musical careers, the Unity All Stars members look forward to living and rocking for as long as possible, riding the wave wherever it goes.